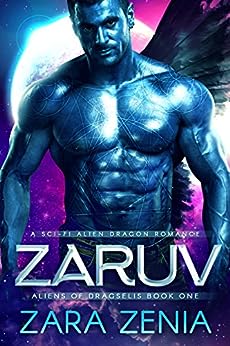 My new patient is odd...because he says he's from another planet. And can shift into a dragon.
Oh, on top of that, he's a prince.
But maybe I'm crazy, too.
Because after getting to know him, I wouldn't mind becoming his princess.

Jennifer is a nurse that runs a free clinic on Vaxivia. She has no time for dating and fights for the health and well-being of her Vaxivian people. That is, until one day when she encounters a strange patient in her clinic.

Prince Zaruv just started his exile along with his three younger brothers, which was a common tradition in a new king’s reign. They were supposed to get to Dragselis, but were attacked and their ship and crew went crashing toward Vaxivia.

They got scattered throughout the land during the crash. Zaruv was injured while landing, but luckily he was found by the local children and brought to the free clinic.

He needs to hide the fact that he’s an alien dragon shifter from Jennifer, the beautiful human nurse taking care of him, for fear that she may not help knowing what he is. But he needs her help as he has no one else to turn to. He can’t help but start to feel attraction towards her.

Will Jennifer still help him after finding out he is an alien? What will happen to them when the locals find out that he’s not from this planet? Will they end up together or will fate and the rest of the Vaxivian society have other plans for them?