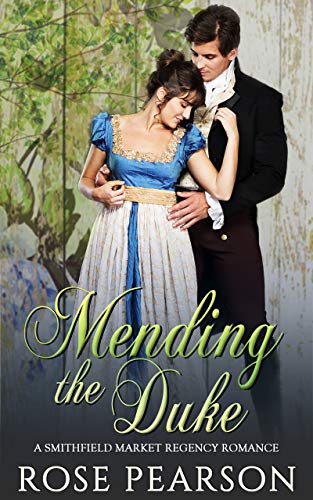 Although he was one of the richest men in the country, even all the money in the world couldn’t save his wife and first child from passing.

Even a year later, the effects of tragedy linger through the halls and empty rooms of his estate.
Wealth, though, brings an opportunity for special remedies, and out of desperation, Lord Royston’s sister arranges for a special guest from an orphanage to hopefully bring light and laughter into the Duke’s life once again for a short time.

If only the Duke was more receptive to the possibility of joy still.

Now Laura Smith finds herself chaperoning Eloise, a delightful young orphan from the house she herself was raised, for a temporary visit to the opulent but mirthless estate of Lord Royston.

As it turns out, maybe Eloise is not the only person the Duke might need to heal.

No stranger to loss herself, Laura might be the only person who can mend the Duke and help him discover love and laughter once again.

Welcome to the world of the Smithfield Market in Regency Era London, a new standalone series by Rose Pearson.

Other books by Rose Pearson: