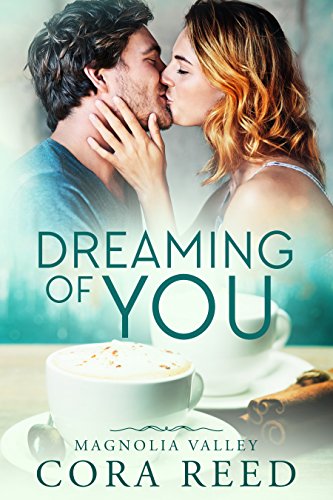 Free - Dreaming of You

Welcome to Magnolia Valley, Montana, a small town with sexy men and the passionate women who fall for them.
She's always had a crush on her friend Calvin...

Josie Wheeler isn’t a risk-taker. She likes her routine running the Morning Jolt cafe. The last risk she took was asking her dreamy friend Calvin out—and that failed miserably. But as her thirtieth birthday gets closer, that routine starts to feel like stagnation.

After his marriage went up in flames, Calvin Monroe knew love wasn’t for him. Since then, every relationship he’s had has been no-strings-attached. But Calvin’s not nearly as commitment-phobic as Josie thinks he is; he just can’t find anyone that measures up to her....and when he finds out about her crush, he makes her an indecent proposal.

Josie is vibrant, funny, smart—and Calvin’s wanted her since they first met. But he knows he’s not her type. Josie goes for wholesome guys, not divorcees with bad reputations.

An overheard conversation changes everything. Calvin realizes Josie is—was—into him, but he was too dumb to see it. If he can convince her to take another risk on him, he’ll win her heart. So, he makes her an offer she can’t turn down: Two weeks to try out anything she wants in bed.

Josie knows Calvin doesn’t do forever, but she says yes to his proposition, anyway—it might be just what she needs to get him out of her system and her life out of its rut.

What Josie doesn’t expect is their exhilarating chemistry setting the sheets aflame and entangling her wary heart. But when her cafe is threatened, she has to decide what she’s willing to risk for a love beyond her wildest dreams.

This book is a part of the MAGNOLIA VALLEY series and can be read in order of publication or as a standalone.