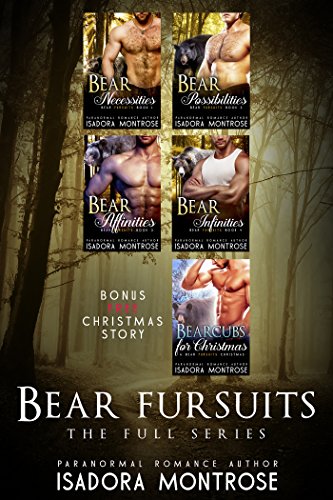 Marine Jack abandoned his curvy Hannah in order to complete his top-secret undercover mission in Uzbekistan. How can she forgive him for disappearing and lying to her in the service of his country?

Navy Seal Will had to lead his Joint Forces team instead of pursuing his terrified mate. Four years on, how can they sort out their mistakes to get a second chance at love?

Col. Doug Enright isn’t looking for love. He and his wife married right out of West Point, but she died in Afghanistan leaving him grief-stricken. Beautiful, built-for-bear Madeline needs a protector. Maddie’s sophisticated wiles awaken this stoic shifter’s frozen libido. But what will it take for a bear to love twice?

Air Force Pilot Roman has been lost — presumed dead — for three years. But his fiancée still feels their bond as strongly as the day they met. How can Gabriella locate amnesiac Roman in the deep woods? Will the feral shifter she tracks down love her or eat her for lunch?

Bonus Short: Bearcubs for Christmas: Babies at Christmas! What could be cozier? Or more terrifying? When the bridge to town washes out, it will take Jack’s entire clan to make sure his Hannah is delivered safely of their premature triplets.